Understandably, anyone under the age of 60 has heard of memes at least once. Whether it was because you look at them yourself, get sent them daily, or have even just heard of them, it is impossible to say that memes are an expansive creative medium. Everywhere you look, in every community, memes have been used to express ideas, opinions, or even things as complex as emotions, current events, and ideological positions. Of course, however, 2022 has been no exception to these things either, with memes being formed from basically every global event and incident from wars to movements, all the way to the halls of congress and presidential campaigns. Whether it’s “Let’s Go Brandon” or Will Smith slapping Chris Rock—memes are a part of our everyday culture. But what are memes? Where do they come from? And what makes memes so great?

When discussing memes, it is important to highlight and understand what memes even are. Gabriel Gall, a Junior here at Truman High School, described memes as “a picture with a descriptive caption that is meant to be funny.” This is not too far off from Merriam Websters’ definition which states that memes are, “an amusing or interesting item (such as a captioned picture or video) or genre of items that is spread widely online, especially through social media.” Memes are generally comedic, usually conveying points of interest or even used to educate or advise people on important topics: “I’ve been reading a lot of historical memes so I have learned a lot of history based on that,” said Senior Brandon Cheney when asked what things he has learned from memes. This sentiment was also shared by Jason Morris-Hart, stating, “I guess I have learned useful information” in response to the same question.

So then where did memes come from? Technically speaking, they are older than the modern computer system, with jokes like “Kilroy was here” being older than the ideas surrounding current memes themselves.

According to PBS memes could be traced back even further to 3 B.C. to an image of a joyful skeleton drinking wine and relaxing, with the saying, “Be cheerful, live your life”; what they referred to as “the original YOLO”. Since then memes have evolved to associate with all types of things, both good and bad, but no person has described memes so accurately (even if unintentionally) as Larry the cucumber from Veggietales. Specifically stating that “In the future, all comedy will be randomly generated!”

Memes’ timelessness seems to almost act as screenshots into the past and what was found to be humorous and popular during the period. However, there is another way it could also be taken: what ideas were being spread during the period.

Memes nowadays have been used for all types of things besides making people laugh. As mentioned before, memes have been used to educate people about things like history and social topics; being used for things such as propaganda and informational warfare such as the Boogaloo Movement in 2020 or NAFO with the Russian Invasion of Ukraine. In both circumstances, memes were used as a tool for recruitment, and political argumentation, and as a tool for flooding the internet with their imagery. We have also seen memes making fun of policy decisions and political takes, with entire communities dedicated to these types of memes such as the subreddit r/politicalcompassmemes. These types of memes aren’t lost on Truman Students either. Student Anthony Matthews showcased a meme where two eggs lay next to each other, a brown shell egg and a light shell egg, before being cracked and showing the same yolk. He followed this up with the statement: “We’re all the same on the inside.” The same sentiment was shared by Morris-Hart, stating that he thinks, “it’s something useful, especially for making change, due to the influence of memes.” Even though memes tend to be more lighthearted and not serious, this is an interesting and intensive change to the past decade or so of meme content that has come from the internet.

But there is another use that memes have had a surprising effect on communication. The conveying of ideas goes beyond just teaching people niche facts and historical tales, but appears to extend as far as conversational use. When asked, Truman students responded positively to the idea of using memes to communicate: “They can show somebody how they feel, talk about it, and lighten up somebody’s mood.” says Matthews when asked if memes are good for communication, “I use the memes I do to tell jokes and make people laugh.” Students have also shown that memes are great educational tools, showcasing humor as a device for teaching people new information. It also cuts down on intensive reading while still conveying the message of texts; such as this meme about the Praetorian Guard.

Simplistic, and yet recognizable from another meme format while simultaneously teaching us facts that we may have previously not been aware of. In the words of Morris-Hart, memes are excellent tools for conversational utility: “because it is more amusing to people than just reading a text.” People tend to learn best from humor, which is why videos created by people such as Oversimplified are both incredibly popular and very memorable and are filled with quotable lines and easy to make memes from. 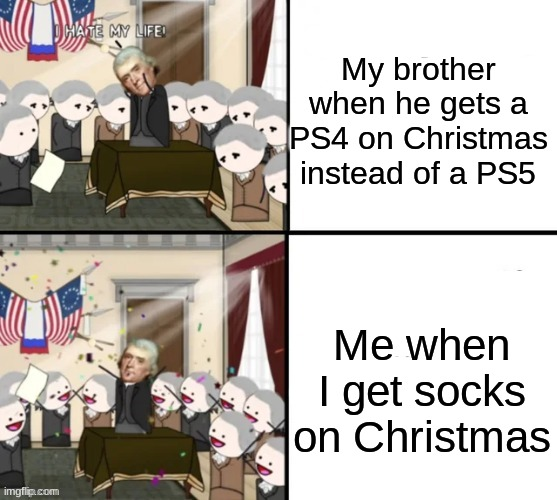 There is surely no doubt about how oddly powerful memes are. Whether we wanna chuckle, make a statement, argue our ideas, fight for a cause, or even just have a conversation about how we are feeling or what we are thinking about, memes exist as one of the best mediums for impactful communication and conversation about anything and everything.