The Independence City Council recently reallocated two million dollars in ARPA funds that were given to them for Covid relief. The Marshall Project, a non-profit organization dedicated to the reporting of the criminal justice system, released an article last week detailing the decision made by the City Council to reallocate around $587 thousand to the police department to incentivize public safety. This is in contrast to the amount spent on housing and public health, both of which receive substantially less. These moves have spawned divergent opinions across the city and the same applies to students at Truman who have reacted to this in a variety of ways. 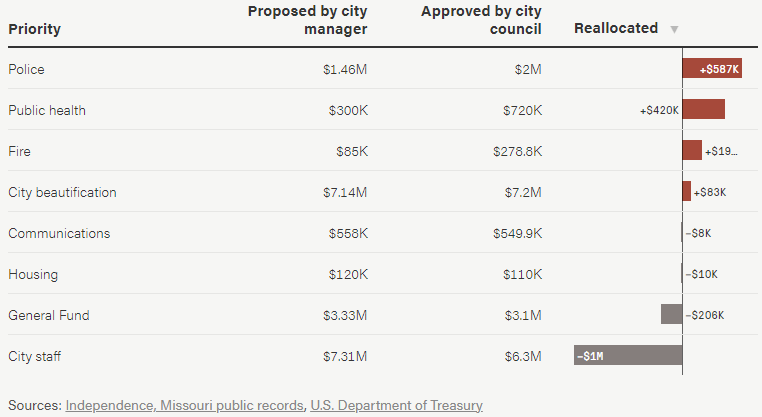 These budgetary changes are no surprise to anyone who has been driving around Independence as of late, with a noticeable uptick in police presence in what feels like everywhere. This is likely due to the amount of money spent on increasing the police bonus from $600,000 to $1.8 Million. This is alongside an $8000 retention bonus for each of the 203 police officers currently serving in the department. “The idea with those retention payments was to make it compelling to stay and work for the Independence police department,” city manager Zach Walker told the Marshall Project last week. This part of the initiative received some support from the students at Truman. “I feel like the police need more funding since they are understaffed,” said Ryland Preston, “but if there are other projects that need funding they should get it.”

However, a lot of this funding was not spent on just retention and pay. Of this funding, $80,000 was reported to be spent on Ballistic Helmets, with another $600,000 to be spent on things such as vehicles and academy training. New developments showcased by both the Marshall Project and the St. Louis Riverfront Times also show other purchases, such as sniper rifles, riot gear, police dogs, as well as things like detention unit cameras and a radio tower camera system. “After seeing the riots in other jurisdictions, it was apparent that we needed to update our equipment and training in this area,” as stated by the department’s chapter in the city’s budget report for 2022. “We haven’t had that here. But we did have it on our doorstep,” said Police Chief Adam Dustman, referring to the riots that took place in Kansas City during the George Floyd protests in 2020. “Some of those purchases are okay, but it’s easy to overdo anything,” said Hunter Sanders, another student here at Truman, “Why do they need more weapons and riot gear? Don’t you want to stay away from riots?”.

Interestingly, the City Council turned down the opportunity to invest in Police body cameras and a gunshot detection system, both of which operate with the idea of keeping Police Officers accountable while conducting their position. To student Laura Powell, this is an egregious error, and “With all of the controversy and drama going on, body cameras are necessary, and knowing how many shots were fired is important. Just because three shots hit, that does not mean ten were not fired.” She would also go on to say how she feared more George Floyd like incidents and cases because of the lack of transparency.

The U.S Treasury defends these types of purchases as “Community Violence Intervention,” which was defined by the Bureau of Justice as: “an approach that uses evidence-informed strategies to reduce violence through tailored community-centered initiatives.” which proved to be understandable by student Mateo Villarreal, saying that “People who are alike flock together.” Due to the little top-down view there is regarding ARPA spending, these types of spending plans are fairly common. “They ultimately decided to reallocate the bulk of the funds for these public safety purposes,” said city manager Zach Walker. “…it seems like they were in their minds trying to respond to the feedback that they felt they were getting from their constituents, who had indicated that an emphasis should be placed on public safety.”.

These purchases don’t come without some scrutiny of course, with students here at Truman High School sharing some of their distaste with the funding reallocation. “The money could be used for something better,” said Sanders, whose sentiments were also shared by Villarreao, who said that a lot of this money was, “going to waste.” Students appeared to have generally negative feelings about one part of these reallocations or another, with the lack of body cameras and investment in riot gear being the primary cause for concern; followed closely by the disparity in housing versus police spending. “I feel like we should invest in other places. Sure the police are big but they are not the entire city,” says Powell, “there are more things than just riot gear”. This feeling was even found in Preston, who saw this disparity in housing as problematic.

Regardless of how one feels about the police, students here at Truman High School are concerned. Not just for their community, but themselves as well as their friends and families. Many of the interviewed believe that the money ought to diverge into other community projects instead of law enforcement, citing road poor conditions and a lack of affordable housing as reasons for concern.