Good Mourning: How the Truman Community Responded to Tragedy

Friendship bracelets are made from thread or bead, given to one another as a sign of companionship and friendship. Many people wear them, but for friends and families at Truman High School they came to represent something more.

“She was shy and awkward but when she came out of her shell she was really bubbly. You could almost say she was weird but in a good way,” said junior cheerleader Sadie Foster.

“Once we got her to open up it was really exciting because she was super sweet and silly,” said sophomore cheerleader Kyleigh Hendrix.

Those are the words used to describe Truman freshman cheerleader Hailey Jeffries. Those words are now past tense. In the early morning hours on August 25th, Jeffries died in a tragic car accident. While the wounds from this tragedy may never fully heal, the Truman community banded together to respond to this unthinkable moment with support and hope.

Even from concrete, a rose can grow. Even from tragedy, Truman cheerleaders found a way to lift spirits. Friendship bracelets began the movement. The Patriots cheer team started creating and selling beaded bracelets with the letters ‘HSA’, standing for ‘Heaven’s Sweetest Angel’. But bracelets were just the beginning of unconditional support over the next few weeks.

“We [the team] would invite her family over to our houses to hang out or even spend the night and make them feel more comfortable, we knew it was hard for them,” said senior cheerleader Gabby Cooper.

It wasn’t just the cheerleaders that were involved in the effort, the entire school came together in honor of Jeffries. And each time someone stepped up it was like adding another bead to the friendship bracelet of community support. Originally the theme for Truman’s first football game was going to be vintage 90’s. However, the theme quickly changed to yellow… Hailey’s favorite color.

“Once I saw everyone at the game, I realized it was easily the most participation we’ve ever had for a single theme. It was really emotional, I couldn’t imagine how her family felt seeing that,” said senior Taylor Schumann. 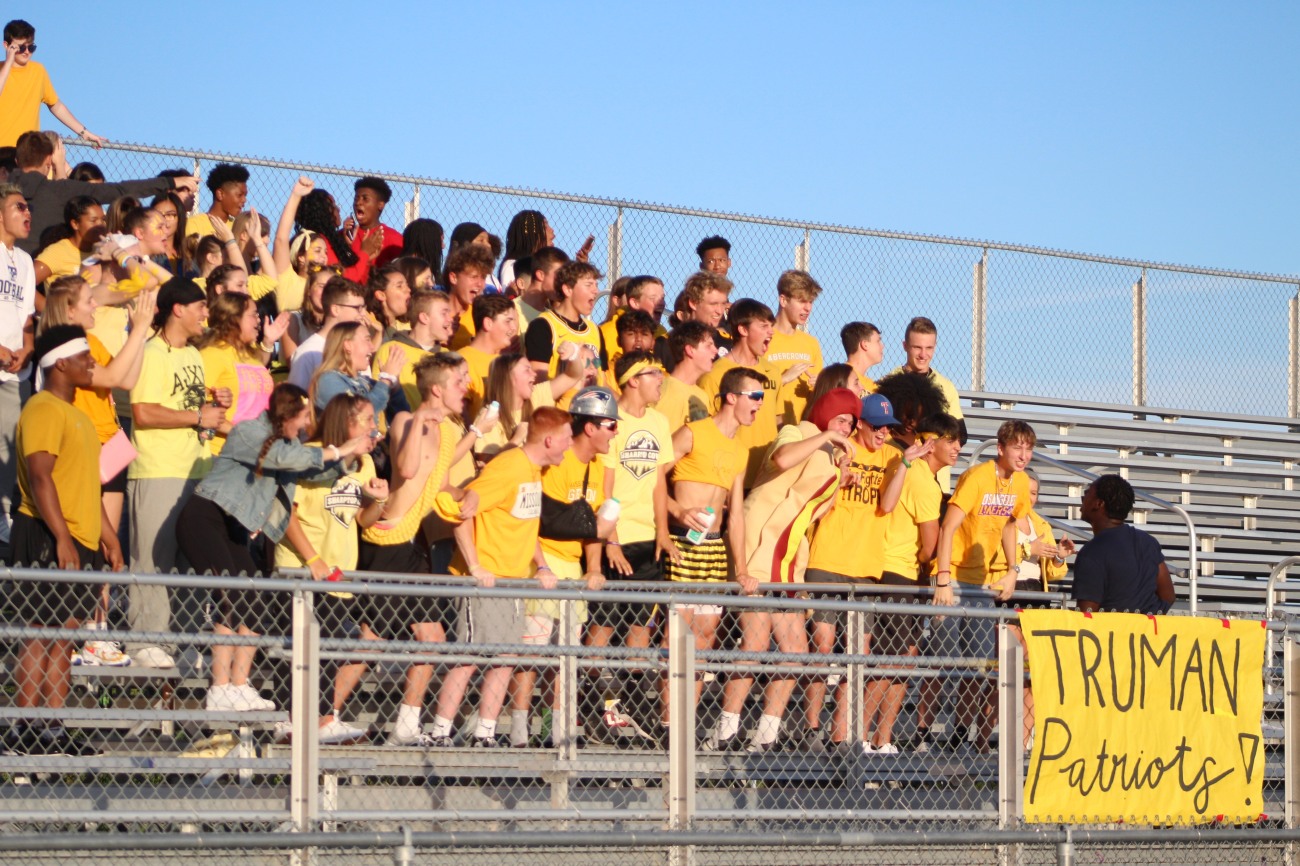 Cheering during Truman’s first football game of the season the student section wore the color yellow in honor of Jeffries’ memory. (Photo by Vanessa Garcia)

With emotions running high, the Patriots’ cheerleaders and Staley’s cheerleaders came together to share a moment of compassion and remembrance. It was a moment that not only captured the raw emotions of the day, but also helped begin a healing process as a rival helped add yet another bead of support. They unexpectedly showed up on Truman’s side of the field for more than just the normal get together of fellow cheerleaders. They showed up with their own bows, colored yellow, in honor of a fellow cheerleader and in support of their opposition. In this moment it was no longer a rivalry or two teams pitted against one another. In this moment, all that mattered was the memory of a tragedy and the strength to move forward.

“Whenever the Staley cheer team came over is when it set in that it was more than just a football game, we were there in support for more than just the football team,” said senior Caleb Allen.

The Truman cheerleaders wore yellow bows during the first football game of the year. It was Jeffries’ favorite color. (Photo by Vanessa Garcia)

The friendship bracelet of support added another bead when it spread from one fall sport to another as the volleyball team faced cross-town rival, William Chrisman.  A rivalry that has spanned over the last 60 years disappeared for one night and was altered into something unforgettable. As Bears students filled the opposite side of the gym they carried a large yellow poster reading “WC loves THS” with signatures from every Chrisman volleyball player and every Chrisman student in attendance. The unity didn’t stop there. Each Bears player came out in a yellow warmup, some of them going as far as a yellow sock or shoelace.

“It was really heartwarming and made us feel closer as a community. It’s something the younger classes will always remember as well as the upperclassmen ourselves,” said volleyball senior Olivia Lundquist.

Supporting their team during their rivalry volleyball game with William Chrisman the student section stands behind a sign created by Chrisman student athletes to show their support for the Truman community and Hailey Jeffries’ family in the wake of the tragedy. (Photo by Elijah Soliz)

Bead after bead after bead slipped onto the string as more and more people within the Truman community found ways to show they were there to remember and help heal those left grieving. Tragedies such as this one impact and affect people in different ways. Some people even find themselves reflecting on their own mortality and their own life during the process.

“After it happened we appreciated each other more and kind of realized that life doesn’t last forever. We’re still trying to recover, losing a teammate is the hardest thing to go through,” said Hendrix.

“The entire student body at Truman really stepped up when we [the team] and her family needed them most. It was good to know that people were so supportive even if they didn’t know her,” said Foster.

From Truman students, to opposing fans, to athletic teams, and other members of the greater ISD community, people showed up to help out in a variety of ways. The contribution from Truman students and staff raised enough money for her family to honor their daughter in what they see is the best way possible.

“She had a bucket list of certain things she wanted to do, the money that we were able to raise is going to her family so they can fill it for her,” said Cooper.

Each bead that makes up a friendship bracelet seems so minor, and by themselves they are minor. They’re just random pieces with no purpose. But when the beads are put together they are no longer individuals. Together they represent something much bigger, much more powerful. They represent friendship and everything that comes with it. Friends are there for the good and the bad. They’re there to lift each other up when the situation calls for it. They’re there to lend an ear when no one else is listening.  And when the situation is a tragedy… there’s nothing more important than a friend. And just like the simple beads on a bracelet symbolize a bond much greater, these acts of support symbolize a community here to lend an ear, a helping hand, or just a shoulder to lean on. There are no words, no deeds, no comfort that will totally erase the pain of the tragedy. But the Truman community is hoping their actions will help provide even a little solace to Hailey’s teammates and family.