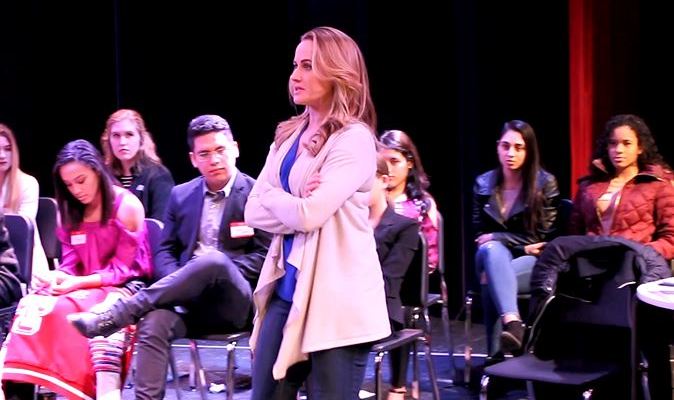 She has participated in many plays, giving life to amazing characters, such as Grizabella on “Cats”, Elphaba on “Wicked”, and Judy on “9 to 5″. Not every young aspiring actor or actress has the opportunity of participating in an acting class with an authentic Broadway star, but some of our students had that once-in-a-lifetime chance.

Our Digital Media Production team stopped by the class  to interview Parris about a variety of subjects ranging from the background of her career, some of her most important experiences, and the purpose of her visit. Here is what she had to say:

What was your very first play? Not professionally, but something like a school production that made you think ¨This is what I want to do for the rest of my life¨.

My very first play, was actually with Mr. Mayers. He did ¨Babes in toyland¨ at my middle school and I had never been a part of anything like that. I knew I wanted to sing and I remember getting so excited cause I auditioned for it, I didnt know what I was doing or anything about that: and I got a solo. I came home and I told my mom, I was like “Oh my God, mom! I got a solo in Babes in Toyland!” And she was like “Good! That is so great! What is it?” And it literally was “I have been careless and lost my sheep”. It was two bars, not even, it was like a bar and a half, it was nothing. I think just being part of it, you know, realizing that this was a real thing that people do. And the team work, I had no idea how it worked between working backstage and the people working onstage, the people with the costumes and the band. So, that was my first experience. I think it definitely opened my eyes, I was like 12 and it kind of blew my mind.

Who was your most important role model as you grew up? Who do you think is your biggest inspiration?

My biggest role model growing up…that is such a tough question, I mean, I probably have to say my mom. She went through a lot growing up, she was a poor kid, but she kind of made her own life, and came to be this incredible, knowledgeable and educated person, who wanted to experience everything and try everything, so I think that has kind of being my mantra in theatre, as well as in the world. I just wanted to try and experience everything. Thanks, mom.

You were on Cats, School of Rock, Legally Blonde, Wicked…Of all of these plays, which one do you consider the highlight of your career? And which one you enjoyed the most?

I have done a lot of things, I have been really fortunate, and I would say it’s hard to pick and point a “highlight” in that career. It’s funny how this business works, where you do one thing and it leads to the next thing, and even though it may create the next opportunity, at some point in the future that job is going to create another opportunity, so they all kind of built to the next level. I think I’ve had a highlight career in almost every show I’ve done, I mean, there’s a lot of moments when you get to do what I do, you go “Oh my God, this is a reality. This is my life. This is my job. People pay me to do this.” And I think everytime that I have that moment of just walking out on stage, and doing my job feeling confident that I know what I’m doing, that is always the career highlight.

Of all of the characters you have played, which one do you love the most? With whom did you feel the strongest connection?

That’s another really tough question. You learn as an actor to intimately connect  with every character you play in some way, with every character I have really had a deep connection. You know what is interesting as I think about it? The characters I’ve really felt truly connected to were probably Rosabella, when I did “The Most Happy Fella” and “Mother in Ragtime”, both of them are in the middle of a world that is changing around them, and both of them are facing how to stay themselves but also grow and change in the middle of that world, so that probably says something about me.

What do you want to leave students with?

I hope talking to students today that I leave them with a lot of things. One of them is the knowledge that being better than you thought you could be at anything, helps you across the board. It’s so easy to sit back and say “Oh, I memorized the lines and learned the music. I’m done. That’s my job.” And to be able to talk to somebody and help them discover the next level,  how they can improve and even take people in a bigger journey, is so rewarding to me, and I think, you know, there’s something about theatre that helps to create empathy in a person. I just want that the things I say to these students could help them in life, not just on stage. Being able to get rid of your bad habits, and getting in other people shoes, whether you’re an actor, a CEO, a construction worker, that is a life skill that helps you on your journey, no matter what you do.
Parris proved to be a lovely human being, inside and out. She has fought for what she wanted, and her hard work has been rewarded. She is currently playing Grizabella in “Cats”, performing a breathtaking rendition of the song “Memory”. She is a very busy person, but she took some of her time to visit our school and give the new generation of actors and actresses some acting lessons. She is the voice of the experience talking, so we better not take for her advice for granted, because she has been to many places throughout her life, and they all have a reason and a meaning.

Patriot Vision’s Aaron Renshaw takes in for a closer look at the Parris visit.